Our highly trained and experienced engineers can handle all of your TV Aerial installation, satellite and TV wall mounting needs & CCTV.

We pride ourselves in giving you a great service using only the best products at an affordable price. All our installs come with a full 12 month parts and labour guarantee and lifetime telephone support.

Calling Accrington Aerials on 01254 377195 guarantees you speak to an experienced member of our team with a wealth of knowledge in your local area.

This ensures you are given a true price over the phone. no small fake prices to get your booking then have an engineer turn up and double the price at your door. the price your given on the phone is the price you pay. 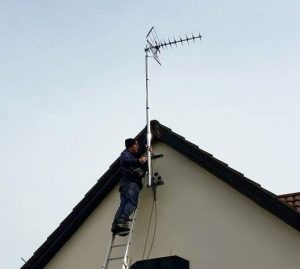 New aerial installations to properties large or small to single or multiple rooms.

Looking to watch Freeview, YouView or BT Vision, then call Accrington Aerials for our latest offers and LOW prices! 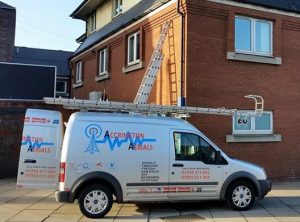 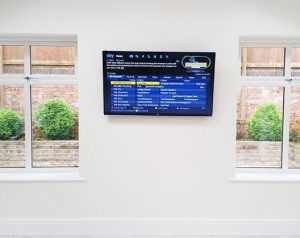 Professional TV Wall Mounting services for your home – Simply your TV on the wall and no cables to be seen!

Our experienced engineers will wall mount any size TV and hide all cables. We provide top quality brackets and leads to connect the services you require.

Accrington Aerials began trading in 2013, we have served the domestic market from day one and over the last five years gone from strength to strength with corporate clients.

Accrington Aerials gives the same customer service and high standard of workmanship to a single aerial to one TV point as to a new housing development of 50 homes with multiple points.

Strive for excellence in customer service

Had my aerial moved from a chimney stack that is being removed and moved to the back of my home, Gareth came and fitted a new aerial to my room, and the lounge and the attic room, all work was completed clean and tidy and with a professional manner, very friendly everything working great.

A couple of weeks latter I had to call them as my TV was not getting a signal, I completed the return call form and within minutes on Sunday evening Clive called to arrange for Gareth to come round the next day. Gareth returned and managed to rectify the problem within the hour again very friendly and helpful.
I am disabled and rely on my TV when I’m unable to leave my room or home,
Big thanks guys really happy with the speed of your service and installation done x

Called these guys after loosing TV reception due to wind, arrived within half an hour and sorted it out. Excellent service highly recommend 🙂

Left a contact form in the morning and was called back a couple of hours later. I originally wanted a cable from my aerial fitted, however this company was extremely honest in advising that this was not required. They provided me with lots of information to help with my query and were extremely friendly and helpful. It is not very often you come across genuine, honest people. I would highly recommend this company, should i have any future work required they will be my first call. Thank you

Phoned these guys up with a tv signal problem today, I explained my problem, Will,  who I think heads up the business, explained what the problem may be, and he would get to me when he could. Within an hour the guys were here, sussed out the problem, and charged me as per telephone quote! How can anyone complain?
Great service, and not ripped off.
I wish these guys all the best, Thankyou will and gaz.

I have used this firm on three occasions now. Latterly to install CCTV. I cannot praise them highly enough. The best service by the best lads using the best technology and equipment. There was a slight hitch but Clive was on it in a flash and sorted it. Just for the hiccup Clive installed a TV aerial for free. I could write an essay on how impressed I am with Accrington Aerials.

Absolutely brilliant service, friendly and approachable young lad came to extend my satellite cable. Had excellent knowledge of hiding the cables so you can’t tell the cables coming from a different room! Came out extremely fast, same day service. Much appreciated William

Excellent service!! Clive arrived within half an hour of ringing him and sorted the situation no problem

Would definitely recommend and use again if needed!

Extremely impressed, thank you guys for coming so late on to sort my parents BT box and sorting the signal booster out so that they can receive freeview in all other rooms.

Would recommend to anyone who asks.

My husband called them on Tuesday and they were able to fit us in on Thursday. Very professional, polite, knowledgeable young man arrived and was able to give me the present of Xmas TV.

We had previously been unable to get any signal here on Buckshaw Village so had to watch TV using Now Tv apps over the internet … not ideal and not much choice. So thanks Will for doing a great job at fitting us a new digital aerial! Highly recommend.

Brilliant service, Honest and professional guys who know their stuff – Thanxs for today – job well done xx
My dad recently bought a new tv and on the box it said it did everything bar make him a brew, Him being allergic too new technology has meant that he has spent the last few weeks following the instruction book that I think was wrote for tiny fairies with university degrees in ‘ setting up technology ‘ and swearing that much I now think their dog thinks it’s name has changed too ‘ boxxxcks ‘.

Anyway b4 the TV was chucked through the window or worse my dad was by his wife who by this point was planning on how too murder him and bury him with the dam telly. I rang Clive who having known him (and the family) from school and seeing him build this business from strength too strength knew he would be able too help dad and julie, and he did – well his team of lads did.

Both dad and julie told me when I spoke too them earlier that when the lads arrived they were friendly, polite and the second they stepped into their front room both lads removed their work boots as too not tread the wet miserable rain inside and got on with the job.

They quickly set it up and had it working as it should be so my dad is now as happy as a kid at Christmas and Julie is happy that it’s finally done and dad will now stop bloody messing.

Accrington Aerials were super. We were thoroughly impressed with their service. We rang them to enquire about our TV not receiving a signal in our new house, and they said they’d come and have a look free of charge in a few minutes! They arrived and checked to see if the aerials were working, and they weren’t.

They suggested buying a Freesat box because we had satellite cables, and they knew the signal was poor where we live. They had excellent knowledge of the area, and saved us hundreds of pounds by being honest and telling us installing an aerial would not be a good idea, and that a Freesat box was much more sensible.

They also did not charge for coming to the house and advising us! The guys also took their boots off at the door. Top service, polite, friendly and honest help. Recommend them to anyone.